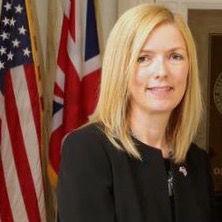 Karen Bell has served as the British Consul General in Houston since July 2015. She has overall responsibility for leading the UK’s engagement in the states of Texas, Oklahoma, Arkansas, Louisiana and New Mexico.

The United Kingdom (UK)’s Consul General serving in Houston, Texas, is poised to become the next British High Commissioner to Vanuatu.

The British High Commissioner to Vanuatu and Solomon Islands based in Honiara, David Ward, said the British government has agreed to appoint Karen Bell, to administer responsibilities between the two countries.

He said the soon-to-be Commissioner hopes to arrive in Vanuatu before the end of July this year to celebrate Independence Day here.

Commissioner Ward made the announcement during the commemoration of the British National Day in Port Vila.

During that same event last year, Commissioner Ward announced the decision of the government of UK to re-open a number of High Commissions around the world, including Vanuatu.

It is anticipated that the new office of the British High Commission in Port Vila will open in July this year.

President Obed Moses Tallisalso conveyed during the event that the agreement of the new resident high commissioner has been issued as Vanuatu awaits the final word from the UK government.

The two countries continued to enjoy a good relationship until the British High Commission ceased operation in 2005.