Vanuatu Has One Of The World’s Strictest Plastic Bans. It’s About To Get Tougher

The measure, meant to curtail ocean pollution, outlaws products that get thrown away after a single use.

PORT VILA, Vanuatu ― At the bustling open-air market, women in bold-patterned dresses sit behind tables laden with a dozen different types of bananas, chips made from purple taro root and mounds of dangerously red chilis.

This is the main food-shopping hub in Port Vila, Vanuatu’s capital, where locals hunt for whatever produce happens to be in season. Pomelos the size of small boulders sit next to scores of emerald avocados. But there are no flimsy plastic shopping bags ― not here or anywhere else on this island nation in the South Pacific.

Vanuatu banned single-use plastic bags, drinking straws and styrofoam food containers last July in a dramatic attempt to stem the flow of trash from the country’s coasts into the ocean. Prime Minister Charlot Salwai gave businesses and shoppers alike just a few months to prepare, and violators now face hefty fines between $175 and $900 an offense. Residents have been surprisingly receptive to the measure, and lawmakers are now preparing to restrict more disposable products, making one of the world’s toughest plastic bans even tougher.

“We want to protect our environment,” said Ellen Jimmy, who sells produce in Port Vila’s open-air market six days a week. She noted that ditching plastic hasn’t hurt her business, and customers without bags rarely balk at carrying their papayas home under an arm.

The country’s foreign minister, Ralph Regenvanu, announced on Feb. 17 that the government would expand the current ban to include a slew of additional single-use products. On the chopping block are disposable diapers, plastic cutlery and grocery packaging like netting and clamshell cases. The ban’s next wave could go into effect by December.

Ocean plastic has become a scourge around the globe, floating in the remote seas off Hawaii and washing up in the ice fields of Antarctica. It wreaks havoc on marine life and is even polluting our food chain. The United Nations recently ”declared war″ on marine litter after finding that a garbage truck of plastic is dumped into the ocean every minute.

Vanuatu, which has a total population of over 275,000, is responsible for less than .1 percent of marine plastic debris, according to global waste statistics. Pacific island nations as a whole are estimated to contribute less than 1 percent of the world’s mismanaged plastic waste that feeds into the oceans.

By unshackling itself from the ease and convenience of plastics, Vanuatu’s leaders hope to set a standard that the rest of the world ― especially top plastic consumers like the United States ― can follow.

But American policymakers have had a much tougher time banning far less than Vanuatu. New York has been attempting a statewide ban on plastic bags for years, and Gov. Andrew Cuomo (D) said last month he’d push for it again in 2019. Only left-leaning California has been able to fully ban the products through legislation. Hawaii also has a de facto ban, after every county in the state passed its own law. A few American cities also have bans, or charge a nominal fee to buy them.

For most of the country, however, the flimsy plastic totes are as easy to come by as ever. Americans use about 100 billion plastic bags every year, only a tiny percentage of which get recycled. 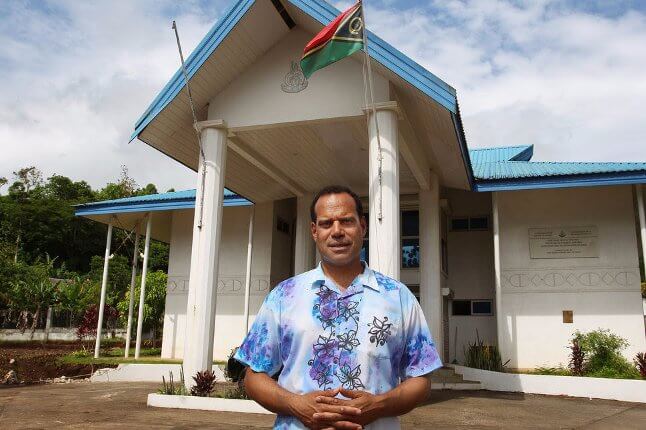 In Vanuatu, the war on plastic began with a Facebook campaign.

Christielle Thieffry and Georges Cumbo, both natives of France but residents of Vanuatu for more than two decades, didn’t think their proposal would take off when they started the page calling for a bag ban in March 2017. They felt compelled to act after they noticed the growing amount of trash on beaches around Port Vila. When they first moved here in the 1990s, the place was still “quite a pristine environment,” Thieffry said. “We started to see things change as more and more rubbish washed up ― plastic all over the beaches.”

The Facebook page quickly racked up supporters, while an accompanying petition the couple made gained some 2,000 signatures in weeks. Their effort attracted the attention of lawmakers, and in July 2017, the prime minister mentioned in the annual independence day address that the country would eradicate plastic bags within the next year. The law was formally introduced in January 2018 and went into effect the following July after a six-month grace period.

“The thing about Vanuatu is that 95 percent of our junk we import. We don’t make it here,” Regenvanu, the foreign minister, said in February. “That’s why I’m passionate about bans because you can just stop it from coming in. As many things as we can ban, we’ll ban.”

Plastic bans in other countries have experienced a rockier rollout. In Australia, a spate of “bag rage” swept the country’s supermarkets when the two largest retail chains decided to phase out plastic bags. Some irate customers attacked cashiers just days into the new policy, and the supermarkets found themselves retracting their policies, then reinstituting them with a grace period.

Part of the reason things were easier in Vanuatu is that respect for the environment is baked into the culture here. A thriving handicrafts industry that produced alternatives to single-use plastic items has also existed for generations. This helped make the switch from disposable plastic bags not only painless but popular. And the policy change had a visible effect right away: Locals point out that there’s practically no trash in the streets of downtown Port Vila, compared to the time before the ban went into effect. 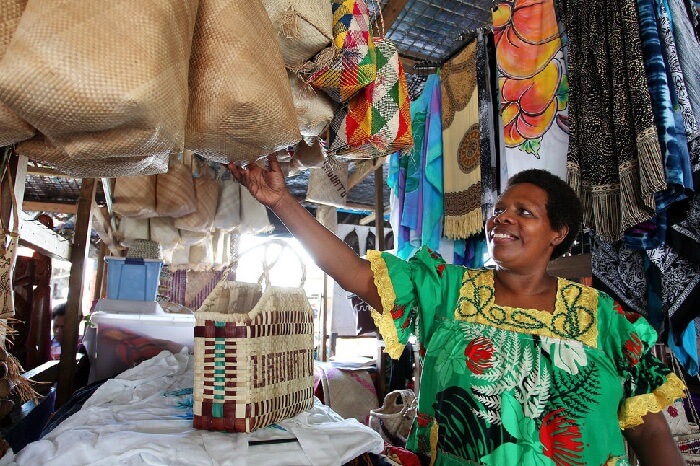 “That’s a very big difference,” said Rebecca Bula, a member of the Bulvanua Arts and Crafts Cooperative. “As a citizen, I’m really proud to see a clean place, no plastic bags on the beach flying around. It’s really helped.”

Bula is one of many women who rely on the sale of traditional handicrafts for a living. Bags woven from pandanus fronds, the leaves of a local palm-like tree, are common alternatives to single-use plastic for Vanuatu’s people. The totes come in complex patterns, last for years and are completely biodegradable.

Weavers like Selina Kalsong, known around the country as “mamas,” learned their art from older generations and will pass it along to youngsters. Different islands are skilled in different styles of weaving. Bula said the plastic ban has already been a boon to mamas throughout the country who have seen increased sales in the past six months, a trend they hope to continue as the ban expands.

Kalsong, who lives in Mangaliliu Village, less than 20 miles north of Vanuatu’s capital, can make a complicated bag in about a day. The women in her town have a shop just off the island’s main road, where they sell bags, baskets, totes and placemats for around $15 to $35. Sales recently helped Kalsong install electricity in her home.

Locals rarely pay as much as tourists, often getting a family member to make one of the bags for them. Many locals in Vanuatu carry the bags with them everywhere.

But plastic hasn’t disappeared completely. Disposable water bottles are still commonplace and are not included in the current ban. The country has only a fledgling recycling program that residents say is frustrating to use. And though there’s a bottle-return scheme that offers 4 cents per empty container, water bottles often wind up in local dumps.

At the Bouffa Landfill, the dump site for Port Vila and the rest of the island of Efate, plastic trash is visible everywhere.

Roy Alick, who has worked at the dump for 10 years, says it used to be worse. He noticed the effects of the ban right away: Almost overnight, there was far less single-use plastic in the island’s garbage. But he said there’s a long way to go yet.

“We already banned the plastic bags, but there are things that you can find in here that we have to stop,” Alick said, prodding an old shoe and the shell of a microwave. “We still have plastics.” 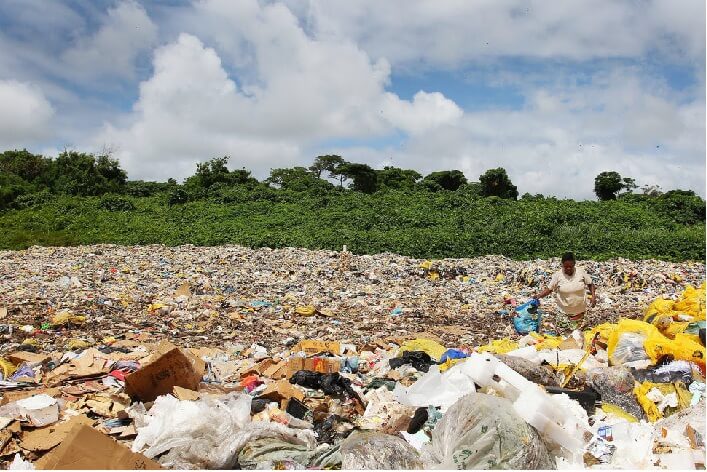 A local woman looks for recyclable items at Bouffa Landfill in February 2019.

Some single-use products have begun to slip around the new anti-plastic law. At the open-air market, certain types of fruits or vegetables might come packed in plastic netting. The city’s grocery chain, Au Bon Marche, has also begun packaging fruit and vegetables in nets ― even though it quickly moved to dump plastic bags when the legislation was first announced.

Regenvanu said future iterations of the ban will target some of these new products.

“For us in government it’s been an exercise in people coming up with other things that we then need to ban,” he said.

Despite Vanuatu’s best efforts, the country still sees old bottle caps and chip packets wash up on its beaches. Regenvanu blamed this on the country’s proximity to other nations with limited, if any, waste infrastructure to deal with their own mountains of plastic trash.

“There are some countries that really are just pumping it out,” the minister said, pointing to the Philippines and Indonesia, two of the world’s biggest sources of ocean plastic pollution. Those nations have seen major economic growth in recent years, and with it, the increased production and use of plastic. “Those countries really need to step it up,” Regenvanu added. 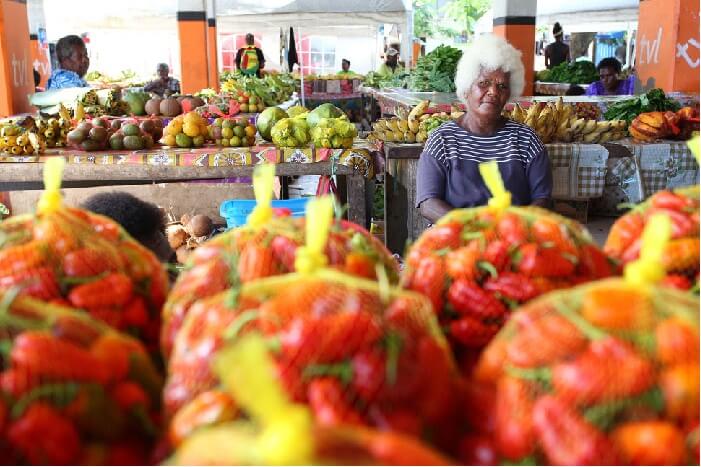 Marie Norway awaits customers at her fruit and vegetable stall, selling them in plastic netting at the Port Vila Markets. Future iterations of the plastic ban will target this type of netting.

Environmental groups say that while efforts to develop better waste management systems are important, industry deserves much of the blame for the ocean plastic problem.

“The problem with plastics is not simply a litter problem, it is a pollution problem created by corporations and mismanaged by governments, and it should be treated as an inherently dangerous substance,” Kopp said in an email. “Blaming consumers for littering, and asking them to change their behavior will never solve this problem. The only way to make sure throwaway plastic does not end up in the environment is to tackle it at the source and stop its production.”

Regenvanu noted that Vanuatu’s efforts may be a unique case study that only really works in a small nation. The country only has one major company that produces plastic products, and lawmakers have been working with the firm directly to help it adapt to the new policies.

“It’s because we’re so small that we can do it. We’re like a little laboratory for being able to do things like this,” the foreign minister said. “One of the advantages here is that it is so small that you can do things that you may think impossible in other places.”